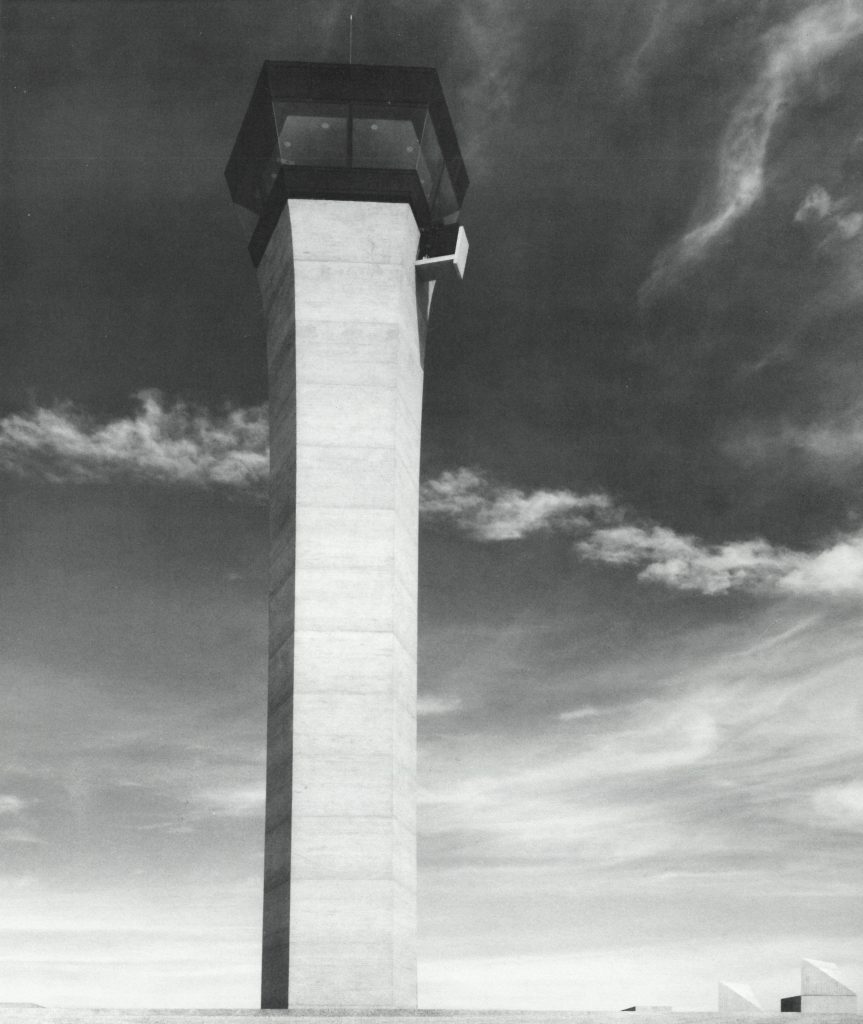 At the beginning of his presidency, John F. Kennedy had many lofty goals:  End the cold war and achieve world peace; bolster the civil rights of minorities and improve the economic plight of the poor; and, of course, explore outer space and put an astronaut on the moon.  Less well known but equally ambitious was his desire to raise the quality of the architectural design of federal buildings.  Kennedy’s definition of this category was broad and not limited to courthouses and museums.  He included any structure built by the government to serve the public, even buildings used by the FAA at airports.  As a result of the president’s commitment to this goal, I.M. Pei was chosen in April of 1962 to develop a new prototype for air traffic control towers.  Three months later—57 years ago this summer—Pei chose Severud Associates to perform the necessary structural engineering.

Pei was selected by the FAA Design Advisory Committee, a panel of several notable industry professionals.  Their pick was not particularly surprising—Pei had already received acclaim for his work with developer William Zeckendorf on such projects as the The Helix, a cylindrical apartment building planned for New York City (that was never built), Mile High Center, an office building in Denver, and the Society Hill housing development in Philadelphia.  The control tower project would be one of the first that Pei’s new company, I.M. Pei & Associates, would undertake independently.  Pei’s choice of structural engineer was no more surprising as Severud had designed these and several other projects for Zeckendorf’s firm Webb & Knapp, starting back in 1948.

Historically, air traffic control towers were designed and built on an ad hoc basis, usually at the same time and by the same team as the airport at which they were located.  The FAA wanted to assume responsibility for the design in an effort to establish a consistent approach to siting and geometry, standardize the control room layout and technology, and reduce construction costs.  To that end, they had already developed a pre-fabricated control room, or cab, that could be shipped to the site and placed atop the tower by crane.  The cab is pentagonal in plan to minimize internal reflections with sloped walls to reduce glare.  Pei embraced this unusual shape in his design and extended it downward to the ground, gracefully tapering the shaft inward from the top and leaving only enough space within for an elevator, stair, and mechanical risers.

Because it would be employed at airports throughout the country, the prototype tower needed to be adaptable to different volumes of air traffic, topography, and soils.  For the engineers at Severud Associates, this translated into at least five tower heights, ranging from 60 to 150 feet, and two foundation types, spread footings and piles.  The engineers chose reinforced concrete to accommodate these variations.  By changing the outside dimension of the tower (there were two cab sizes) and increasing the wall thickness, they could keep the amount of reinforcement reasonably constant, regardless of the tower’s height.  Concrete was also the best choice for the control building, which was placed below grade so that it did not interfere with visibility from the tower or the cockpit of taxiing aircraft.  As a result, although many combinations of tower, control building, and foundation were possible, all would appear essentially identical to the average airline passenger.

In the years after the prototype was completed, 16 were built at airports such as Chicago O’Hare International Airport (the tallest), Sacramento Metropolitan Field, and Houston Intercontinental Airport (now Bush Intercontinental).  However, as technology progressed—and politicians and bureaucrats came and went—requirements for the tower evolved and the FAA moved on to different designs.  Many of the original towers remain in use although some have been made obsolete by newer, taller towers.  Sadly, at least three have been demolished but several others have been landmarked by their local community, ensuring that they endure as elegant examples of the heights to which architectural and structural design can reach. Severud Associates continues to be a leader in the design of airports.  The firm’s list of innovative and creative airport projects includes the fabric roof of the Jeppesen Terminal at Denver International Airport, the American Airlines Terminal Redevelopment at JFK International Airport, and the Terminal A Redevelopment at Newark Liberty International Airport.  Currently, the firm is at work designing the new Terminal 6 at JFK.