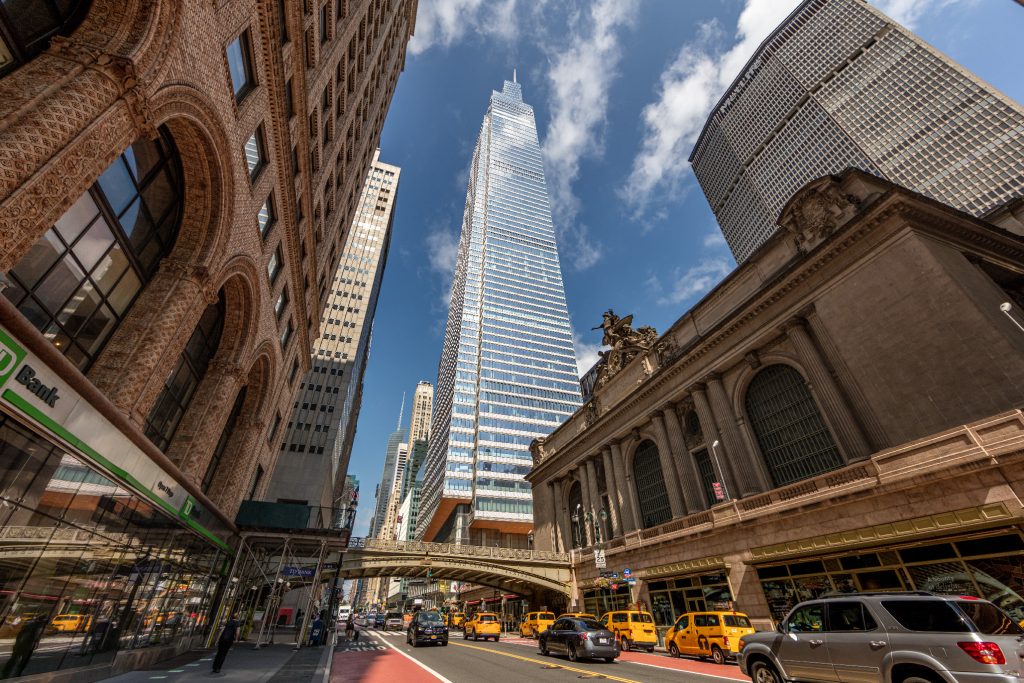 After four years of intensive structural design and another four years of extensive construction observation and special inspection, Severud Associates celebrated on September 14, 2020, the opening of One Vanderbilt, a state-of-the-art tower that at 1,401 ft. in height is the tallest office building in Midtown and the second tallest office tower in all of New York City.  Located immediately to the west of Grand Central Terminal, the building joins lofty neighbors such as the Empire State Building, the Chrysler Building, and the Bank of America Tower at One Bryant Park as a prominent feature of the Manhattan skyline.

Developed by partners SL Green Realty Corp., Hines, and National Pension Service of Korea, One Vanderbilt presents a graceful design by acclaimed architects Kohn Pedersen Fox.  The building’s simple geometry of tapering prismatic volumes is clad in alternating strips of glass and spandrel panels embellished with terra cotta accents that acknowledge its proximity to Grand Central and other historical buildings in East Midtown.  Behind the curtainwall stands a high-rise structural frame composed of 26,000 tons of steel.  The total floor area is 1.7 million sq. ft. and most of the floor plates are free of interior columns, with beams that span up to 70 ft.; strict adherence to performance criteria keeps vibrations within acceptable limits.

Like other Severud high-rise designs, One Vanderbilt employed a steel-first erection sequence pioneered by the firm in the 1970s.  Columns, girders, and lateral bracing at the core were designed to stand alone to a maximum height of 12 stories.  As steel erection proceeded, reinforced concrete shear walls were placed below.  Using a self-climbing form system within the core cells and hand-set forms from outside the core, concrete work followed the structural steel up the building, usually within six floors from the top but never more than 12.  This approach allowed construction manager AECOM Tishman to accommodate potential delays in concrete placement while maximizing the impact of steel’s speedy erection time on the overall schedule.

The core walls, which are the primary component of the lateral force resisting system, are 30 in. thick with a compressive strength of 14,000 psi at their base.  Moving up the building, the concrete strength decreases in steps down to a minimum of 6,000 psi and at some locations, the wall thickness is reduced to 24 in.  Grade 80 steel reinforcement was used throughout.

Control of lateral drift and motion are critical to the performance of all high-rise buildings and especially for supertalls.  Accordingly, the concrete shear walls are augmented by steel outrigger trusses at three intermediate mechanical levels.  Severud coordinated closely with One Vanderbilt’s MEP consultant, Jaros, Baum & Bolles, to configure the floor-deep trusses with the least interference with mechanical systems.  At the top of the building, a tuned-mass damper keeps accelerations within a comfortable range for building occupants.  The entire lateral system was designed based on parameters established by RWDI, the project’s wind tunnel and micro-climate specialist.

One Vanderbilt rests on bedrock with a bearing capacity of 60 tons per sq. ft.  The core is supported by a concrete mat that is more than nine ft. thick.  Its volume of 4,268 cu. yd. was placed continuously over a 24-hour period, a feat considered to be the largest such operation in the City’s history.  Perimeter columns sit on isolated spread footings, the largest of which are 14 ft. square and nine ft. thick.  The perimeter walls stand as high as 53 feet from their base to street level and span four cellar levels.  All concrete foundation elements are constructed with 10,000 psi concrete.  Severud’s engineers developed design criteria based on the subsurface investigation and recommendations by geotechnical consultant Langan and coordinated with their counterparts at the MTA to eliminate the influence of the building on adjacent train and subway structures.

Engineers also coordinated with the MTA on the structural design of the significant transportation facilities that are located within and around the building.  A 4,000 sq. ft. transit hall adds another entry point to Grand Central Terminal and facilitates the flow of passengers to Metro-North and, after the completion of the East Side Access, the Long Island Railroad.  Two new subway entrances and improved circulation corridors will allow easy connections to the NYCT 4-5-6, 7, and 42nd Street Shuttle lines.  A 14,000 sq. ft. car-free plaza replaces the section of Vanderbilt Avenue between 42nd and 43rd Streets and provides relief from the traffic congestion that often occurred at these busy intersections.

Severud Associates has been at the forefront of high-rise building design for most of its 92-year history.  In addition to One Bryant Park, the firm performed structural engineering for the iconic Seagram Building and the Thomson Reuters Building–3 Times Square, both in New York City; 101 Hudson Street in Jersey City, New Jersey; and the IDS Center in Minneapolis, Minnesota.  Current work in Manhattan includes the redevelopment of One and Two Penn Plaza and the new corporate headquarters of JPMorgan Chase Bank at 270 Park Avenue.