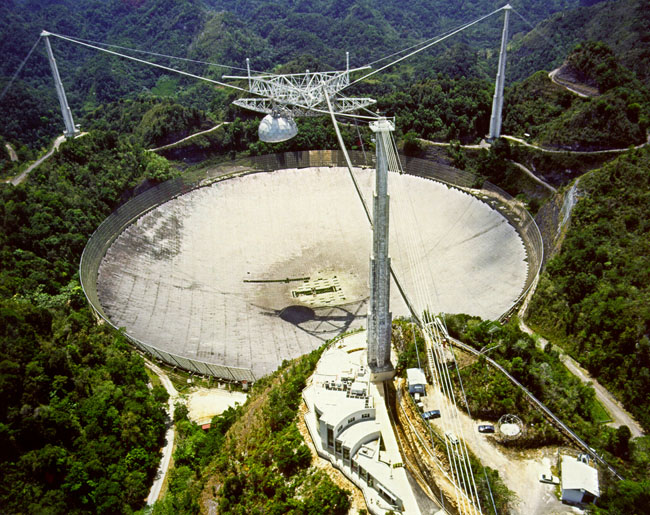 Supermassive black hole binaries. Ultra-faint radio stars. Binary Pulsar J1906+0746. Quasar 3C273. These may sound like fantastical locales from science fiction movies. In fact, they are a few of the actual galactic bodies discovered at the National Astronomy and Ionosphere Center in Puerto Rico, more commonly known as the Arecibo Observatory. The facility opened in 1963 and by 1965 astronomers there had determined that Mercury, a planet only readily observable during daylight hours, rotated once per 59 days, not 88 days as was believed for almost a century. Conceptual design of the radio telescope started in 1958 and in January of 1960—61 years ago this month—Severud Associates was chosen to provide structural engineering services for the project.

The antenna was the brainchild of William Gordon, a researcher at Cornell University in the 1950s who was studying the scatter of electrons in the atmosphere. Based on his calculations, the dish would have to be 1000 feet in diameter in order to reliably detect electrons in the ionosphere, at altitudes as high as 600 miles. Traditionally, a parabolic reflector, which focuses beams on a single point, would have been used for such an application but supporting an elevated dish of that size would be impractical. A reflector supported on the ground would be easier to construct but its focus would be fixed in the overhead direction. Other researchers suggested instead a spherical reflector, which can focus beams on any radial line. The catch, of course, was that in order to utilize this capacity, the antenna’s overhead feed would need to be steerable. Choosing this configuration set the stage for Severud’s involvement.

By the late 1950s, the firm had already established a reputation for the design of special structures, such as the cable-supported roofs of the J.S. Dorton Arena and Charlotte Coliseum, both in North Carolina. Applying their expertise, engineers devised a support system composed of a triangular central platform hanging by its corners from steel cables. The cables extend outward and upward to the top of reinforced concrete towers that are back-stayed with additional cables. At each corner of the platform, a pair of tie-down cables also extends directly to the ground to provide lateral support and facilitate pre-stressing of the support system.

The triangular platform is made up of structural steel trusses. The bottom chords of the trusses carry a circular track girder that supports a feed arm truss. Motorized carriages at the top of the feed arm’s quarter-points hang from the bottom chord of the track girder, allowing it to rotate horizontally about a central pivot. The bottom chord of the feed arm is a circular arc with the same center of curvature as the reflector. Motorized carriage houses hang from the bottom of the feed arm, allowing them to rotate vertically. The combination of circular motions permits the carriage houses to align anywhere within the telescope’s viewing cone. One of the carriage houses supports the radar feed while the other initially contained ballast to maintain symmetric loading. In later years, additional radiographic equipment replaced the ballast.

A cable net was employed to form the spherical reflector. Engineers first developed an ingenious geodesic scheme that used loops of cable stretched into triangles and held together and anchored at their corners by steel connectors counted on concrete pedestals. They also designed a system of small-diameter draped cables, spaced at about three feet on center and braced laterally by larger diameter cables, spaced at 100 feet, that was ultimately constructed. Steel weights attached along the cables create an approximately spherical shape while a grid of concrete pedestals and tie-down cables allow some adjustability, provide lateral support, and resist uplift. Finally, sections of steel mesh were fastened to the cable net to produce the reflecting surface. These were later replaced by panels of perforated aluminum sheet.

As the technology of radio astronomy advanced, improvements were made to the equipment, making the telescope even more central to the exploration of outer space from Earth. Some of the upgrades required the addition of cables and other reinforcements. Sadly, though, decades of exposure to extreme tropical weather events have taken their toll. After cable failures in the summer and fall of 2020, the facility was deemed irreparably damaged and was scheduled for decommissioning. Then, on December 1, 2020, a cable anchorage atop one of the concrete towers failed, which led to the collapse of the feed platform and damage to the reflector and other towers. Although the telescope performed beyond its original purpose and exceeded its expected service life, the loss to the research and engineering communities was deeply felt.

For most of its more than 90 year history, Severud Associates has been at the forefront of the design of complex structural systems. The firm’s list of innovative and creative projects includes the fabric roof of the Jeppesen Terminal at Denver International Airport and recent modifications to its south anchorage; New York City’s Madison Square Garden and MSG V–The Transformation; and renovation of the Los Angeles Forum.