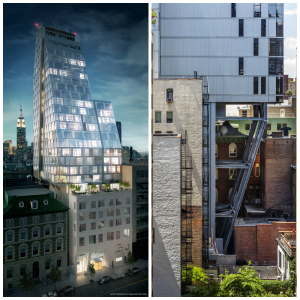 A Jesuit high school and a luxury residential building might at first seem like odd bedfellows, until you see the ingenious mixed-use development known as 35XV at 35 West 15th Street in New York City.  A clever deal enabled Alchemy Properties to acquire air rights from Xavier High by agreeing to place the proposed 18-story residential building on top of a new annex for the school. In April 2010—seven years ago this spring—Severud Associates was retained to provide structural engineering services for this unique project, which involved an array of design challenges and, ultimately, numerous inventive solutions.

Featuring sloped columns, cantilevers, and a glass façade, the tower—complete with 55 luxury condos, a fitness center, lounge, and dining room—sits on top of the school’s six-story, granite-clad annex and adds eye-catching architecture to a tree-lined block in Chelsea.  35XV’s daring architectural design required equally bold engineering, so the team at Severud Associates applied their years of experience and ingenuity to developing structural systems that maintained the architect’s aesthetic vision and also allowed the building to utilize all of its available airspace.

The school’s portion of the building is framed in steel to accommodate the long clear-spans needed for classrooms, an auditorium, and music rooms.  At the seventh and eighth levels, a floor-deep transfer “table,” also framed in steel, extends 36 feet over the site’s rear yard and 17 feet over the existing school building.  Trusses support the smaller cantilever while an exposed sloping framework carries loads from the larger offset to the foundation below.  The transfer table forms the base of the residential tower, which is composed of reinforced concrete flat plates and columns.  Starting at the 12th floor, the tower’s street-facing columns slope inward to respect zoning requirements.  Post-tensioning in the slab at this level resists the tremendous forces at the bases of the sloped columns.

Throughout its history, Severud Associates has provided structural engineering services for residential buildings of every kind including private homes, public housing, luxury condos, and rental buildings.  Some of the firm’s notable residential projects include the conversion of the St. Vincent’s Hospital site in New York’s West Village into condominiums in a complex called The Greenwich Lane; a rental building known as 27 on 27th in Long Island City, Queens; and the Bedford-Union Armory Redevelopment, a mixed-use building that includes affordable housing, in Brooklyn.