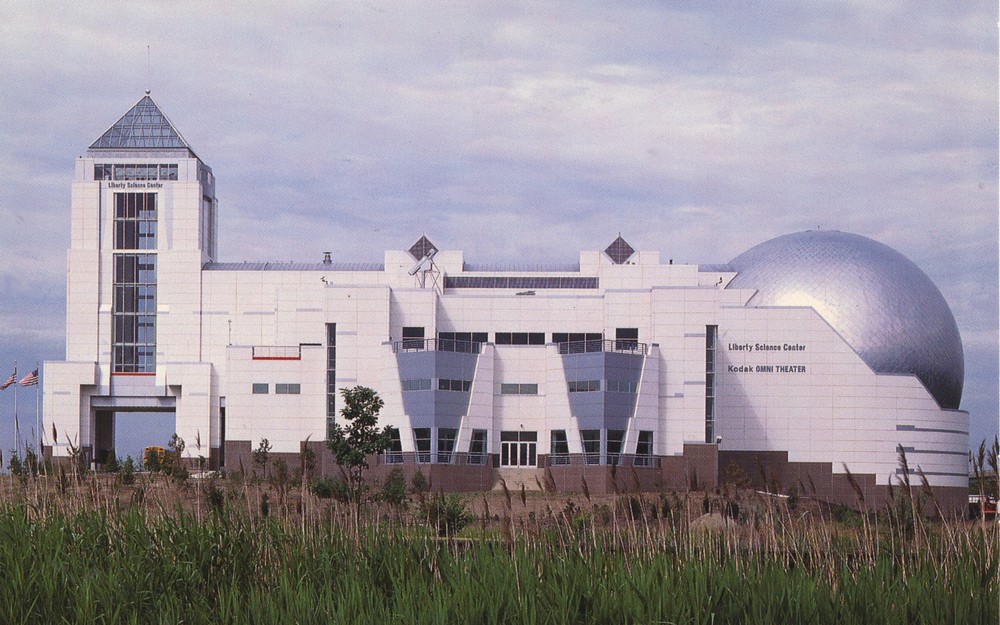 A 70-foot high tornado that simulated the power of gale-force winds; a 100-foot-long, pitch-black tunnel that tested sensory skills; and a “zoo” that showcased tarantulas, African scorpions, and other exotic insects were just a few of the many innovative exhibits—along with movies projected on an 88-foot-diameter hemispherical screen—that intrigued and educated visitors when the doors to the Liberty Science Center opened to the public in January 1993. In May 1988—29 years ago next month—Severud Associates was retained to design the structure for this dramatic 170,000 sq. ft. science center in Liberty State Park in New Jersey.

The vertical lines of the Observation Tower and the angular shapes of the main building juxtaposed with the curves of the massive IMAX Dome Theater make Liberty Science Center’s visual aesthetic more striking and its structural design more complex. Severud Associates met the engineering challenges posed by the architectural design by using a carefully chosen variety of structural systems, the most appropriate and economical materials, and analysis and design software considered advanced at that time. The resulting structure provides a mostly unseen showcase of engineering technology worthy of its own exhibit.

Engineers chose precast concrete double tees to create the long spans and 150 psf live load required in the main exhibit areas. Double tees were also used to create catwalks over the Atrium, from which exhibits could be hung. For these members, the outside flanges were removed, an ingenious—and elegantly simple—modification that created an open-bottom box section that conceals lighting and ductwork between the webs. An exposed cast-in-place concrete frame supports the double tees and also works in conjunction with the concrete stair towers to provide lateral load resistance.

After assessing the complex geometry of the theater, Severud’s engineers concluded that using cast-in-place concrete would be the best way to create the stepped seating and curved surfaces of the IMAX Dome Theater as well. For the dome itself, however, engineers chose a highly efficient and lightweight aluminum geodesic shell. Curved plywood panels that fill in between the triangulated framing members form a smooth, rather than faceted, surface. In areas where self-weight and slenderness were concerns—most notably for the 170-foot-tall Observation Tower—structural steel framing proved to be the most economical system.

Contaminated soil below the site further complicated the structural engineering. The New Jersey Department of Environmental Protection required that the subsurface materials remain undisturbed and encapsulated by clean fill. In response, engineers designed a foundation that minimized excavation: a concrete slab-on-ground, supported by 900 concrete-filled steel piles driven to a depth of 40 feet below existing grade.

In recent years, Severud Associates has added a variety of science-related buildings to its large and diverse portfolio of projects. Notable examples include the Krishna P. Singh Center for Nanotechnology at the University of Pennsylvania in Philadelphia; the Bridge for Laboratory Sciences, part of Vassar College’s Integrated Science Commons in Poughkeepsie, New York; and the Alexandria Center for Life Science in New York City.