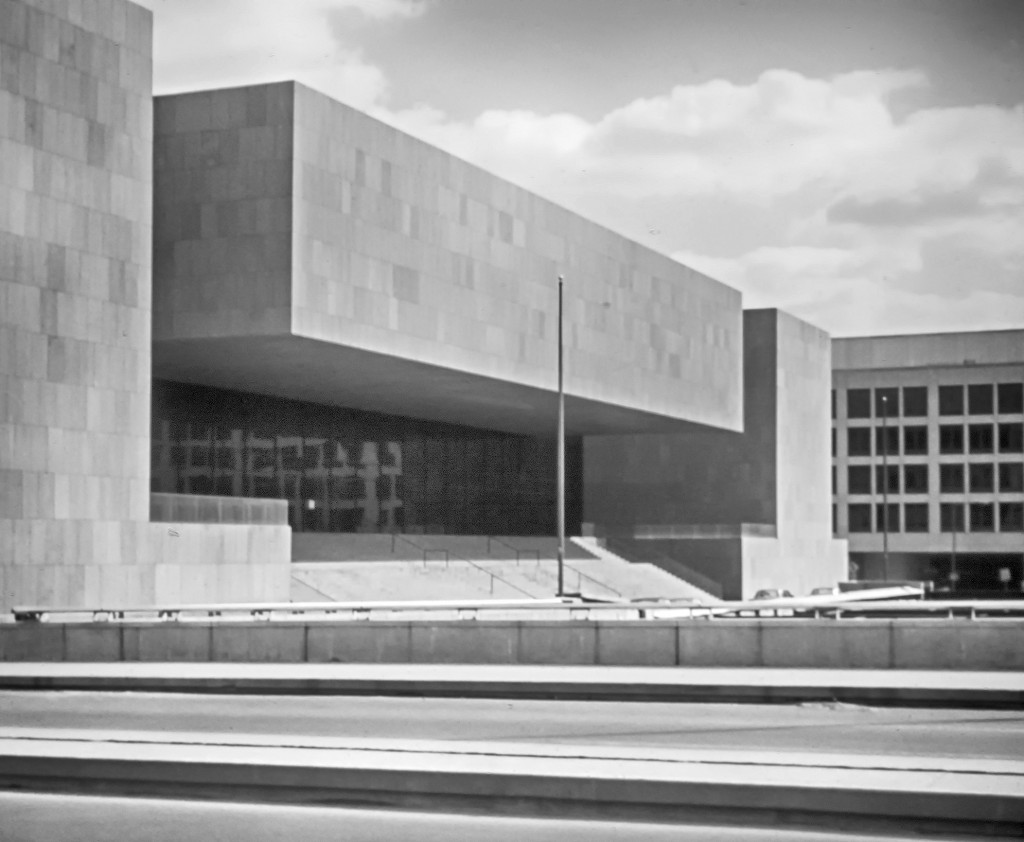 Most people would agree that the U.S. Tax Court in Washington D.C. is a place they would rather avoid, unless of course they are just going to admire the inventive design of this beautiful Modernist-style building.  In 1965, acclaimed architect Victor Lundy was asked by the General Services Administration (GSA) to design the U.S. Tax Court building using a new set of design principles for federal architecture. That same year—51 years ago this month—Severud Associates was retained to provide structural engineering services to execute Lundy’s vision for a truly contemporary government building.

Resembling an elongated stack of blocks, the granite and glass building features office wings at its left, right, and rear sides from which a windowless two-story cantilever projects towards the front.  The cantilever, which houses the courtrooms, hovers dramatically over a grand staircase leading to the main entrance.  An expansive two-story podium rests below all of the building’s blocks and ties them together.

The ingenious structural design makes the courtroom block appear to float above and between the other building components.  Six slender steel columns along the rear edge support vertical loads from the 4000-ton cantilever while post-tensioned steel cables, running through the slabs and into the office block behind, resist huge lateral tension forces at the roof.

The building’s interior is equally impressive with the four-story Hall of Justice, topped by clerestory windows, separating the cantilevered courtroom block from the office blocks.  Pedestrian bridges that span the Hall of Justice at floor levels cleverly conceal the post-tensioning cables and the concrete members carrying the equally huge compression forces.  The cables are anchored into post-tensioned concrete shear walls, which transfer the loads to the foundation.

Recognized by many critics for the way it marries form and function as well as its structural innovations, the U.S. Tax Court building earned first prize in structural engineering in the eighth annual engineering excellence awards of the New York Association of Consulting Engineers.  The building also won an Honor Award in the GSA’s first Design Awards in 1972.  In 2008, the U.S. Tax Court building was added to the National Register of Historic Places, ensuring that it will remain a part of the architectural landscape in the nation’s capital for generations to come.

Severud Associates has a long history of designing federal, state, and municipal government buildings that have been recognized for their structural ingenuity.  Some of these projects include renovation of the United States Post Office and Courthouse in Brooklyn, which received a Design Awards Citation for Excellence in Federal Design from the GSA in 1998; the United States Mission to the United Nations in Manhattan, to which the Concrete Industry Board gave the Roger H. Corbetta Annual Award in 2009; and the Jacob K. Javits Federal Building Plaza reconstruction, also in Manhattan, which earned an Honor Award from the GSA in 2014.